So here is the basic idea… 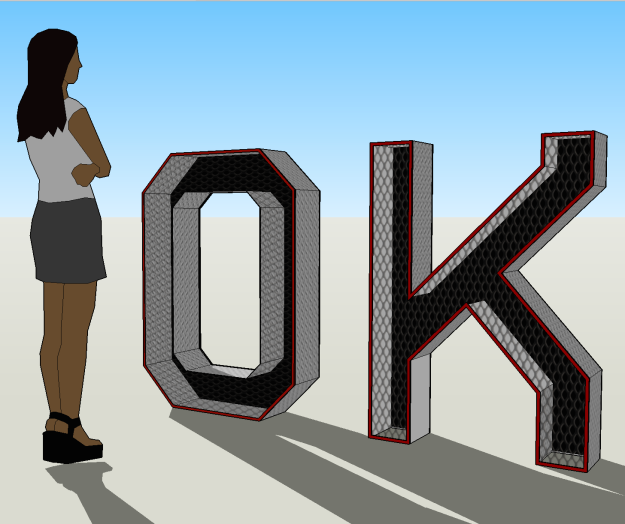 …next, estimating cost of materials, deciding whether I want to cut and or weld it myself or have a fabricator do it, designing the propane poofer, and designing a platform/base.

For those of you following along here, I am currently designing an art piece for the Burning Man

theme camp OKNOTOK.  After doing some sketching by hand, I have a pretty good idea of what I want to create.  The next step is to create a digital blueprint.  I have been working with Google SketchUp and having a great time.  Using the letters pictured here, I had to do some conversions to figure out the scaling for a human-sized sculpture.  I guess I did need so learn some of that math back in high school.

The result thus far looks like this.  This is just half of the sculpture.  There will be propane puffers incorporated so that fire will be able to burst forth from inside the letters.  Supposedly there is going to be a class/workshop in the LA area after the new year for fire effects and art – this will be a good opportunity to learn about the pyrotechnics that will bring this art piece to life.

The following is a timelapse video I shot documenting the beginning of my design process for a fire effect/art piece I am going to create for camp OKNOTOK at Burning Man, 2015.  Check back for updates on the design process.

Yup, it’s December 2014 and we are already starting work for OKNOTOK at Burning Man in 2015.  Some call us insane, some roll their eyes and say its ‘too early’.  But if you are a Burner, ask yourself honestly, does it ever ‘stop’ once you are introduced to the culture and experience of Black Rock City?

While some will relish the time off between Burns, others continue building, making, and turning inspiration into reality,  lighting up the sky in August.  Without giving away the fun details about what is in the works for camp OKNOTOK, there will be some changes and new sights to behold.  Make sure you party with us on the Playa in 2015!

Very simple – Strava just (not sure how recently) added an ‘export GPX’ feature.  Even people using the free Strava account (like myself) can utilize this feature.  You then open Google Earth, and open your exported GPX file and boom – there is your ride/run depicted in 3D.

I often think about how ‘productive’ I am being when I have down-time from work.  After finishing up my freelance gig with The Tennis Channel, I am back to searching for the next work

opportunity.  Productivity shouldn’t only be measured in dollars.  I’m talking about physical training opportunities, running, hiking, biking, etc.  I should relish the time off from work that I have because it allows me to pursue the things I love and affords me the ability to push my body and stay in shape for the next ‘big adventure’.

With all this in mind, I managed to get out for a couple runs including a half marathon distance this past week.  My left ankle (previously sprained at Burning Man) didn’t appreciate this distance very much.  I don’t want to stop running but I think I will stick to less then 10 miles runs to keep the impact down and give my body time to heal itself.  I am trying to help it along with LOTS of hydration and using compression after strenuous activity to help recovery.  To keep the intensity up and reduce impact, I turned to biking this weekend with a nice long ride in Topanga State Park. 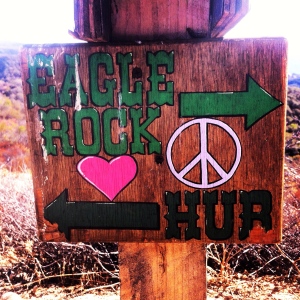 Since I have been in LA it seemed like I had to drive a significant distance to find good riding or trail running.  This Sunday was a great instance of discovery as I learned that access to Topanga State Park is only a 15 minute drive from my house.  I accessed the great trail system from the 405 highway at Mulholland drive.  Parking is at San Vincent Mountain Park near the Skirball Cultural Center.  From this location you can ride some serious distance on a mix of fire roads and single track.

From the Parker Mesa Overlook you can see Santa Monica and Venice quite clearly.

I intended to do about 20 miles and ended up grinding out just over 30…on the single speed.  While my bike choice wasn’t great, the terrain offered amazing climbing opportunities.  I was able to do a loop instead of an out-and-back and managed just shy of 5,700 feet of climbing.  It’s funny how I feel like the mountains here don’t even begin to compare to Colorado – true but the climbing exists.  This ride offered views of the Pacific ocean with some blazing descents. 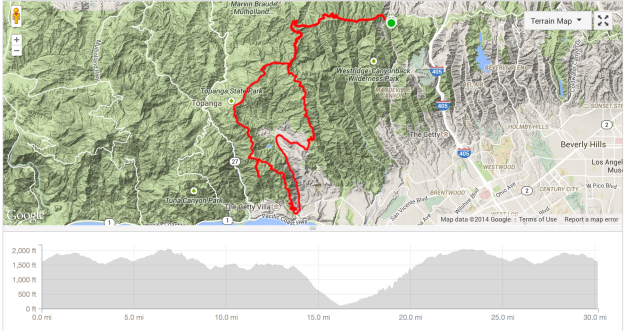 Map and elevation profile of a trail ride in Topanga State Park.

This weekend was a good one, full of well-documented adventure.  Oh how I love to get out of this terrible, oppressive sprawl.  It’s not so much the density of people, or even the urban-ness of an existence here.  Honestly, it’s the air, stagnant and thick with hot exhaust and particulate.  I’m certain that I’m shaving years off my life every time I take a deep breath of this city’s vapors.

We found ourselves packed like sardines into the black GTI.  It’s elegant German engineering lost beneath the provisions and equipment for four of us to enjoy a weekend of camping.  We sacrificed ergonomics and leg room (temporarily) for a taste of the natural world which exists somewhere outside this concrete labyrinth.  Speeding North, the early morning pinks and reds slowly began to illuminate the sky.  Every now and again I caught a glimpse of the PCT as it paralleled parts of our trek to the Southern Sierras.

Breakfast found us in an outdated beige and tan building serving Mexican inspired cuisine.  Juevos rancheros filled my belly and would give me some discomfort later.  Over cups of coffee my travel companions and I discussed the details of life.  We also discussed whether or not the painting of the waterfalls on the wall behind us had the ability to turn on, projecting tranquility on the patrons of this affordable dining establishment.  We never could find the switch. After eating up miles of asphalt through the desert and hugging the corners of a winding canyon, the People’s Car zipped us through the isolated town of Kennedy Meadows.  We blinked and it was gone, Tom’s disc gold course a blur on the side of the road.  Jeremy recorded high-definition, time-compressed video while Andrew piloted the black rocket ship through the pines.  Marcy and I grasped the ‘oh-shit’ handles and felt secure under the groceries and other assorted wares.

Choosing our campsite and erecting tents, we explored our new surroundings.  A curious place, this forest.  We found ourselves perched on the edge of a large meadow, three strands of barbed wire separating us from it’s golden openness.  Trees rose up giving luscious shade, shelter from the alpine sun and it’s radioactive ways.  We walked amongst these elements concluding that we were happy and eager to trek.

We began by eating, a great way to begin.  Setting off on foot, our objective was clear – a rocky outcropping rising up from the far edge of the meadow.  We chose it because it was a high point and we explorers are always drawn to these types of places.  You know what I mean.  A place high above everything that surrounds it.  A place aching with the freedom of unbridled views and brisk winds.  From this aerie perch we viewed the landscape as if it were a model, a perfectly represented miniature world stretching out below us and outward to the horizon.  We ate more food.  We scrambled across and gripped at the rock with our talons.

Upon returning to camp, we promptly assumed horizontal positions on the ground or in a hammock.  The shadows lengthened, the sun turned more golden.  The woods embraced our tired souls and comforted us with a quiet that only a living landscape can provide.

Waking abruptly, we got back into our transportation and drove on dirt roads, upwards to the Bald Mountain Fire Lookout.  A brisk walk saw us to the base of a steel tower rising upwards into the afternoon sky.  Our natural instinct as adventurers is to climb upwards, upwards, higher!  And right there, at the top of this metal geometric fortress was a man.  His duty: viewing this stunning landscape of granite.  He watches the heavens, carefully identifying Vulcan’s electrical outbursts, plotting the locations where they smash into the earth.  This wonderful BLM employee is named Tom.

Tom points to coordinates on his specialized apparatus.

A day fully enjoyed.  We retreat to the comfort of our dirt patch to kindle a fire and fill our stomachs.  All manner of fancy appetizers whet our pallets for some schlongs which Marcy tosses on the cast-iron grate above our flame.  Wine is uncorked.  Memories are shared.  In this tradition of eating, drinking, and enjoying the company of others, great bonds are forged between friends.  We take time to play with the camera at night, truly a fun group activity.  Later, as the last one awake, I bask in the warm glow of the coals, red and orange, pulsing radiant heat.

Day two greets us travelers with cold morning air.  Reluctantly our entourage breaks camp, eats cold yoghurt (Noosa, the best), and piles back into our vehicle.  We’re rolling further West through the forest, over a mountain pass, and into the Kern River Canyon.  The landscape is changing.  Gone is the dry, thin air that once desiccated our lips and noses.  Now, the shadow of large trees holds in the damp smell of the forest floor.  Lime green moss clings to the red, deeply-furrowed bark of old giants as we turn at a sign labeled ‘Trail of 100 Giants’.

That sense of insignificance we all feel in the presence of great things is washing over me from high above.  This colony of giants is both welcoming and unsettling.  Are these trees happy or vengeful?  Would they say to us, ‘thank you for preserving this grove’?  Or maybe, ‘fuck you Henry Ford’.  I’d like to think the former.  I just hope they don’t drop an un-needed branch on my head in an attempt to settle the score.

Our troop frolics and meanders through the ancient sentinels, heads cocked at an awkward angle to glimpse the highest reaches of the canopy.  Some of these trees are over two-hundred and seventy feet tall.  Strolling right up to them like they are old friends, we run our hands over their spongy bark and duck under their exposed roots or into their burned out centers.  This amusement park beats the hell out of anything made by the hands of men.  Individual cells organized themselves over millennia into these magnificent organisms.  How humans could commit such a crime as defiling this amazing planet that has nourished and provided for us is beyond my capacity of understanding.

The weekend is coming to an end and we must return to the coast.  We would love to remain in this mystical place, among rocks, sticks, and soil.  These places are not ours to keep.  Embracing the impermanence of ourselves we can embrace the impermanence of the world, the dynamic and chaotic collection of matter that makes up our reality.  Organizing and reorganizing, elements and thoughts blend together into a collective consciousness which vibrates and echoes out into the black void of the cosmos. 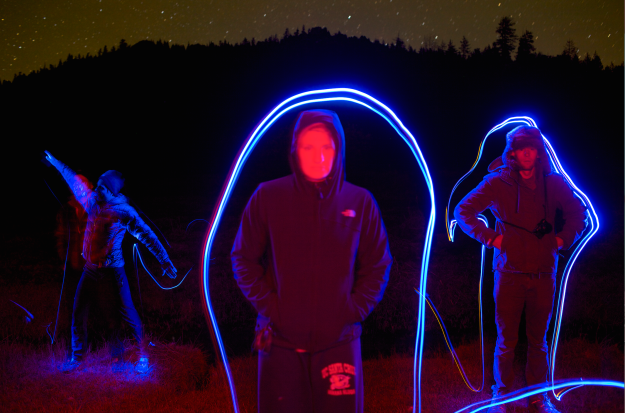 Jeremy’s photo really shows just how large these giants are.